Exercising has always been part of my routine, and while it can be hard to get up and go for a run, years of doing it mean my mind and body knows what to expect and I can fight that struggle pretty easily. I’ve recently realized just how much that routine makes a difference, as I have barely exercised for the last 6 months. At the beginning of last Fall, I started to feel incredibly tired and had no motivation to exercise. I had just started to work for myself part-time and was squeezing in all my regular SAHM housework around trying to build a client base, a blog and a new career with a steep learning curve. It was starting to get cold and dark at night when I normally ran. I had just turned 40. There were many reasons to ignore the signs, and assume I’d get back to exercising again soon. Then in January, I discovered I had a very badly under-active thyroid, which explained why I was falling asleep in front of Paw Patrol at two in the afternoon. I gave up any attempts at exercise at that point, started on medication, and waited for the magic ‘click’ that everyone else I knew who suffered from thyroid problems told me would come when the medication kicked in and I felt my energy return.

It never happened. After 6 weeks I took a blood test and the results showed my thyroid levels were back to normal. I was shocked to get that call, expecting to hear that they were still badly out of whack and that I’d need the medication increased. I waited it out a few more weeks, hoping that the magic click was on its way. Still nothing. I’ve just had my levels checked again, and while normal, the doctor has added some extra medication as she suspects I might be having a problem converting my T4 (now provided by drugs) into T3. No magic ‘click’ yet, but here’s hoping it comes soon.

So it’s now been at least 6 months since I first felt the lethargy and more or less gave up on exercising. Both my pregnancies were high risk for a variety of reasons and so I didn’t exercise much while pregnant, but other than that, I’ve never taken this long off from keeping myself active. And believe me, I see the irony in starting up a blog about staying active with your kids at the exact same time I pretty much stopped doing any exercise.

Having had so long away from my routine, I can see the mental hurdles many moms face when they want to start exercising or want to get back to it after a long absence. The muscle memory that is so often talked about, where your body remembers how to work those muscles hard during a workout, to push through and run that 10k or even that same 30-minute route you’re used to, it doesn’t just apply to the muscles in your arms and legs. I believe it applies to your brain too. Now that I’ve been away from exercising so long, I find it hard to imagine running any distance. I can’t figure out when to do it, how to keep the kids occupied if they are going to come with me. I have to dig out my workout clothes instead of finding them at the top of the pile, ready to wear. When running was part of my routine, these things came easy to me. Now I have many more mental hurdles than just the one where I can’t be bothered. The excuses are piling up. I knew it was time to do something about it. 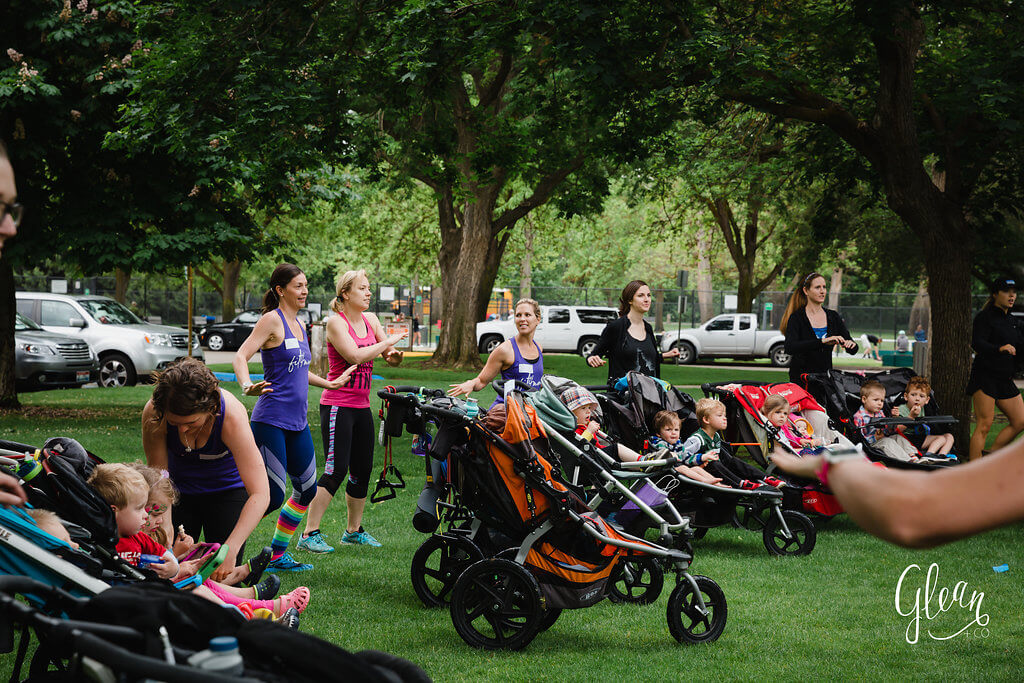 On Friday I went to an open house and free Stroller Strides class put on by Fit4Mom Boise. Stroller Strides is an exercise class run by moms, for moms, where there’s no need to worry about finding care or putting the kids in the gym daycare because the kids come too! I’ve written before about finding time to exercise and enjoy the outdoors without kids, but sometimes that just can’t happen, and to get regular exercise in, you need to bring the kids too.  I had heard about Stroller Strides, I have lots of friends who go to it regularly, but this was my first time. I was nervous; I hadn’t exercised in a while, would that show? And would Smalls, now a 3-year-old bundle of energy, be willing and able to sit in the stroller for an hour?

It turns out my worries evaporated pretty quickly. There were moms who hadn’t exercised at all or in years, some newly post-partum, as well as seasoned class regulars. The instructor made it clear we could do as much or as little as we wanted, and that we were all at our own stage in our journey as mothers trying to be fit; we shouldn’t look to our left or right and compare ourselves to someone else’s fitness level. As we moved from spot to spot, there were options to walk or run, and the class split pretty evenly.

The kids have to stay in the stroller, which was something that concerned me when I was getting ready to go to the event. I threw in a ton of snacks and books and kept my fingers crossed that Smalls would comply. 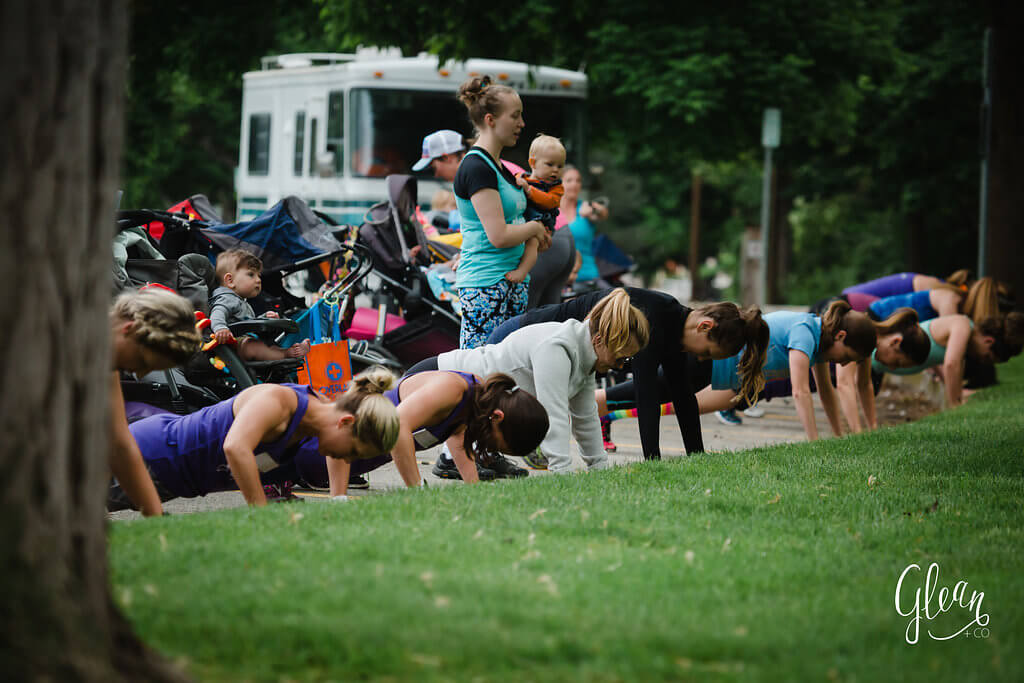 It turned out all the first-timers I chatted to before class had the same concern. The instructor made it clear that kids would get wiggly; as a group they’d seen it all. If someone needed fed, or held, we could go ahead and do what was required, there just couldn’t be toddlers running around as we tried to workout. The best thing about the class, for me, was that the workout was really centered around the kids. We used our strollers to squat or to run fast and ‘zoom to the moon’ after a big countdown with the kids. We sang songs for them, ran in as tickle monsters (or gave a high five if the kids preferred) and engaged them in our fun.  We worked hard, but there was lots of laughing. Kids acted up, as kids do, and these moms all took it in their stride, as moms do. I saw moms pass toys over to other moms when kids got fussy, and lots of kids who knew each other and shared snacks and giggles.

This free class was also a celebration, so, at the end, there was a vendor’s fair and lots of freebies given away. Spiderman appeared and there were bubbles and crafts for the kids. It was great to stay and chat after, to see the community that has obviously built up among the moms who go regularly, and see the relief in the faces of the first-timers, like me, who had survived and who hadn’t needed to feel embarrassed after all about their kids doing normal kid things. 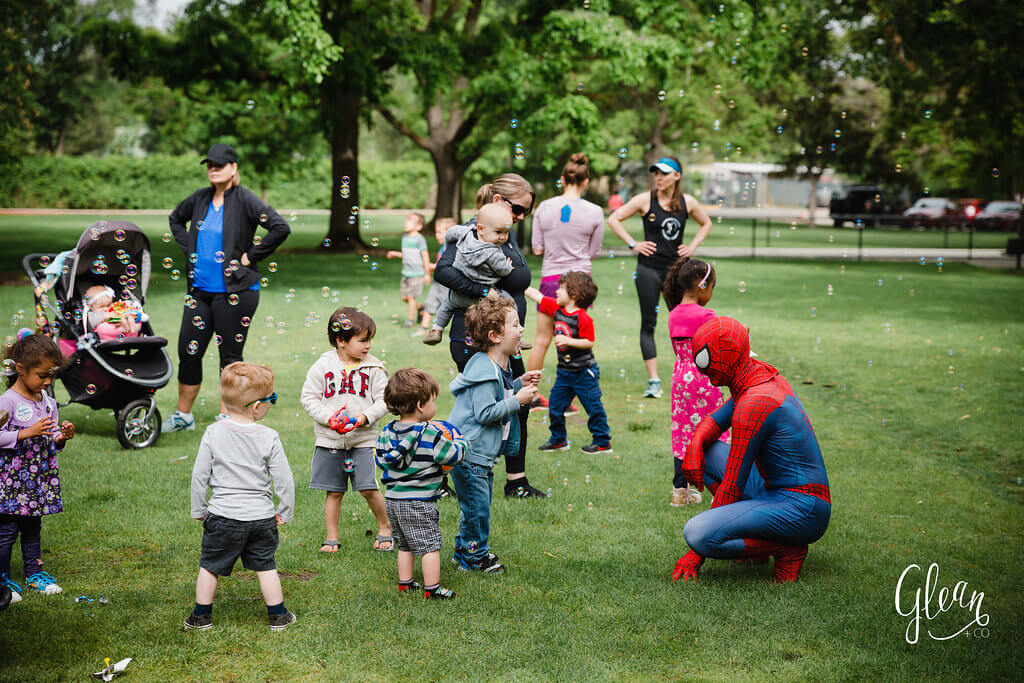 I have lots more thoughts about Stroller Strides and the kind of workout and community engagement you can get from a class like this.  I’m going to keep those for another post, however, as the owner of Fit4Mom Boise, Summer Walters, has offered me something special as a giveaway for the blog, and a chance for me to attend some more classes for free so I can tell you more about it.  If you’re local to Boise, you’re going to want to keep your eyes peeled in the next couple of weeks!

Have you ever been to Stroller Strides or any other mom and kid group workout? I’d love to hear your thoughts.

The fantastic photos of the event were taken by Paige McLeod of Glean & Co.