My boys love to make a mess, and they love to make art. In the summer, we can easily combine these things, have fun making a giant art project outside, and then clean up with the hose after! I love when it starts to get warm again and we can plan some of these fun projects together.

This week, we had a friend over, and decided to go with a process art project. We pulled out lots of cars and plastic animals from the playroom, laid large sheets of paper on the ground, and got to work making tracks everywhere!

Sometimes I like to make an art ‘piece’ with the boys, but more often than not they don’t care about the end result. They are fascinated by mixing the colors, finding out what happens when they move paint this way and that, and getting messy! Neither of them have asked where their pictures are. I’m drying them right now, and if they don’t ask in the next few days, I’m going to suggest we use them as wrapping paper for birthday gifts. 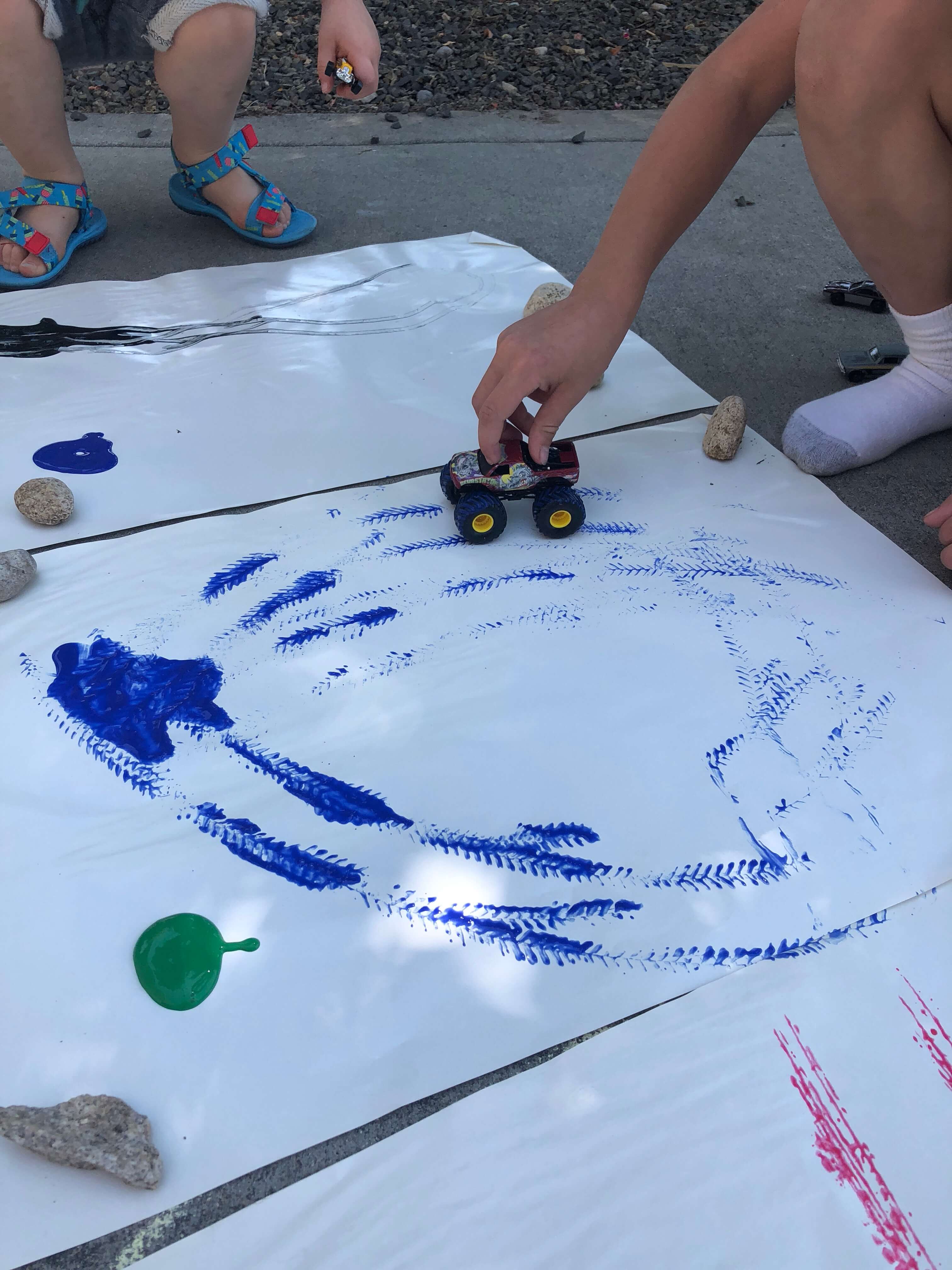 I set the paper and paint up outside while they were busy playing inside. I used stones to hold the paper in place as it was pretty windy. Doing some set up without the kids really helps the project go well, as they were itching to get started as soon as I explained the idea to them. I had them go pick some cars and animals, and we talked about what kind of tracks they might make, and looked for different sizes of vehicles, and animals that might make different footprints.

I squirted washable tempera paint onto the papers and then pretty much left them to it, other than documenting the results! For the first 5 or 10 minutes they stuck to 2 colors each, as I suggested, and watched the tracks they made. It didn’t take long for things to degenerate into mass color mixing and getting their hands messy, which was exactly what I hoped for! 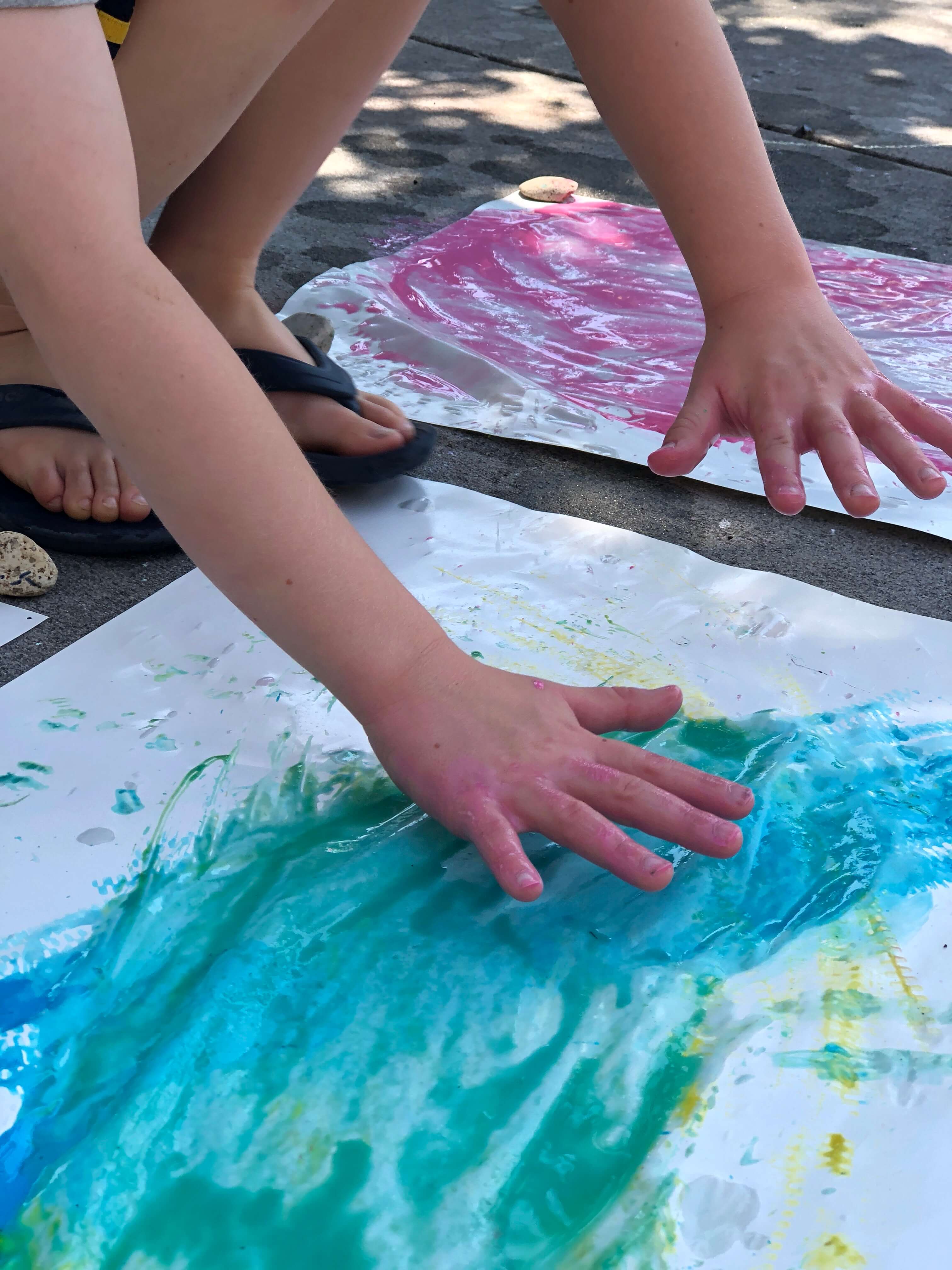 They probably played for thirty minutes or so, mixing colors, and moving paint from one sheet of paper to another with their hands. I had loads of cheap A1 size paper that a neighbor had given me – the shiny kind used for fingerpainting, so I was happy to keep handing out paper. I had filled up a couple of buckets with water and left them close by, and the boys were soon cleaning the cars and animals, and themselves, and watching the water turn different colors as they did so.

Clean up after was just as much fun as the painting! We managed to stay mostly in the shade on our driveway, but it was hitting 100 degrees F for the first time this year in Boise, so we all felt the relief once we turned on the hose and cleaned off ourselves and our workspace. And we sat back and admired the art with an obligatory popsicle! 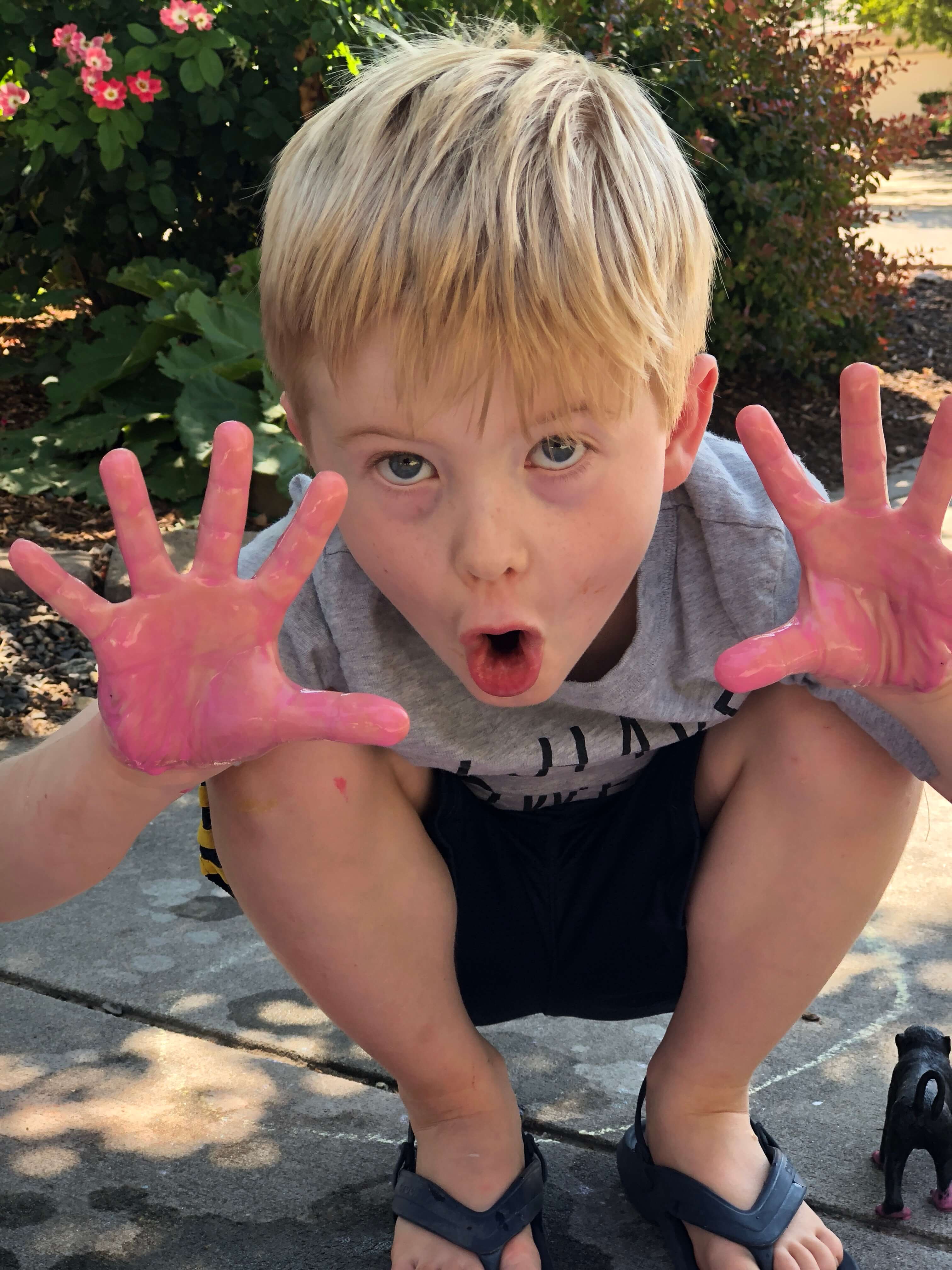 If you haven’t done any messy outside art with your kids before, here are my tips for keeping things under control while still letting the kids have fun.

1. Do your prep first

I located the supplies, set out the paper and paint, filled up some buckets with water, and made sure the boys were in old clothes before we got started. Once the kids know something new and fun is about to start, they’re keen to get going, and five minutes of planning ahead can make all the difference.

2. Limit the number of kids

We had one friend over for a playdate, and three was probably the maximum number of kids I was happy doing this with for the first time! Now we’ve tried it out and I’ve seen what works and what doesn’t, I might try again with more kids (and parents to supervise!). As soon as one kid had a new idea, or mixed things up a little, the others wanted to do the same, and things moved quickly from our planned project to making a mess. Which was fine by me, it’s one of the reasons I love these activities! But having water ready, and only having to deal with three ‘easels’ at once meant it was easier for me to keep on top of things.

3. Have lots of supplies on hand

If you are truly willing to let the kids do this activity as process art, rather than worrying about the result, then they will likely go through a lot of paper and paint. I have this tempera paint, which, while costly upfront, is still going strong after four years of use. I decided to invest in it when I realized that Red and I were going through so much of the small Crayola pots that come in six packs. I’ve definitely saved money as a result. It also means I don’t have to limit quantities or colors of paint during a project. I don’t want to dampen their creativity by worrying about how much paint we’ve gone through.

We were lucky to be given a lot of old art supplies by a neighbor who no longer needed them. We used paper like this; it is cheap, but probably can’t be used for more than wrapping paper! More often than not these kinds of projects go in the recycling after anyway, and so I’m happy to go with the cheaper stuff and not limit how many sheets the kids use.

3. Plan ahead for clean-up

I set up in our driveway, as I knew the paint wouldn’t stay on the paper! I had buckets of water out for the kids to wash as they worked, but when they were done we hosed the driveway and the kids off. While we sometimes do messy play at other times of the year, summer temperatures make this kind of project easy and fun at clean-up time too.

4. Be prepared for a different end result

My boys will follow my directions for a while, but they almost always take things in a new direction I hadn’t anticipated. I love that, it is a big part of why we do these kinds of activities! I love watching their creativity spark and letting them explore with limited boundaries. There is an amazing, intense concentration that happens when you let them immerse themselves in their own ideas and creativity, and to me that is more important than whatever end result we get. That’s why I’m happy to use cheap materials and let them enjoy the process. If you have an idea in mind of what the kids might make (possibly based on a beautiful Pinterest image?!) then it’s highly likely you’ll be disappointed. If that’s what you want out of the process, make it clear to the kids that you want them to follow your instructions, and give them some extra paper at the end to do their own thing so you both end up happy.

Have you created art outside with your kids? I’d love to see pictures, or hear any other tips!