It was a great day for skiing. It had snowed off and on for a couple of weeks. This is the worst season since the 70s, the year after the best season on record, and suddenly there was lots of much-needed snow at our home mountain. Finally, almost every run was open.

But it was not a great day for skiing. It was only me and Red, as my husband was injured so stayed home with Smalls. I’m not comfortable driving the winding steep road in bad conditions, and it started snowing almost as soon as we set out. We drove across an ice rink for the first dozen or so turns up the mountain. I sweated my way up the hill. Red hadn’t been fussed about going when he realized it was so cloudy at the top. I stressed about the driving, he moaned about the fact Daddy and Smalls would be having lots of fun at home. It wasn’t a great start. 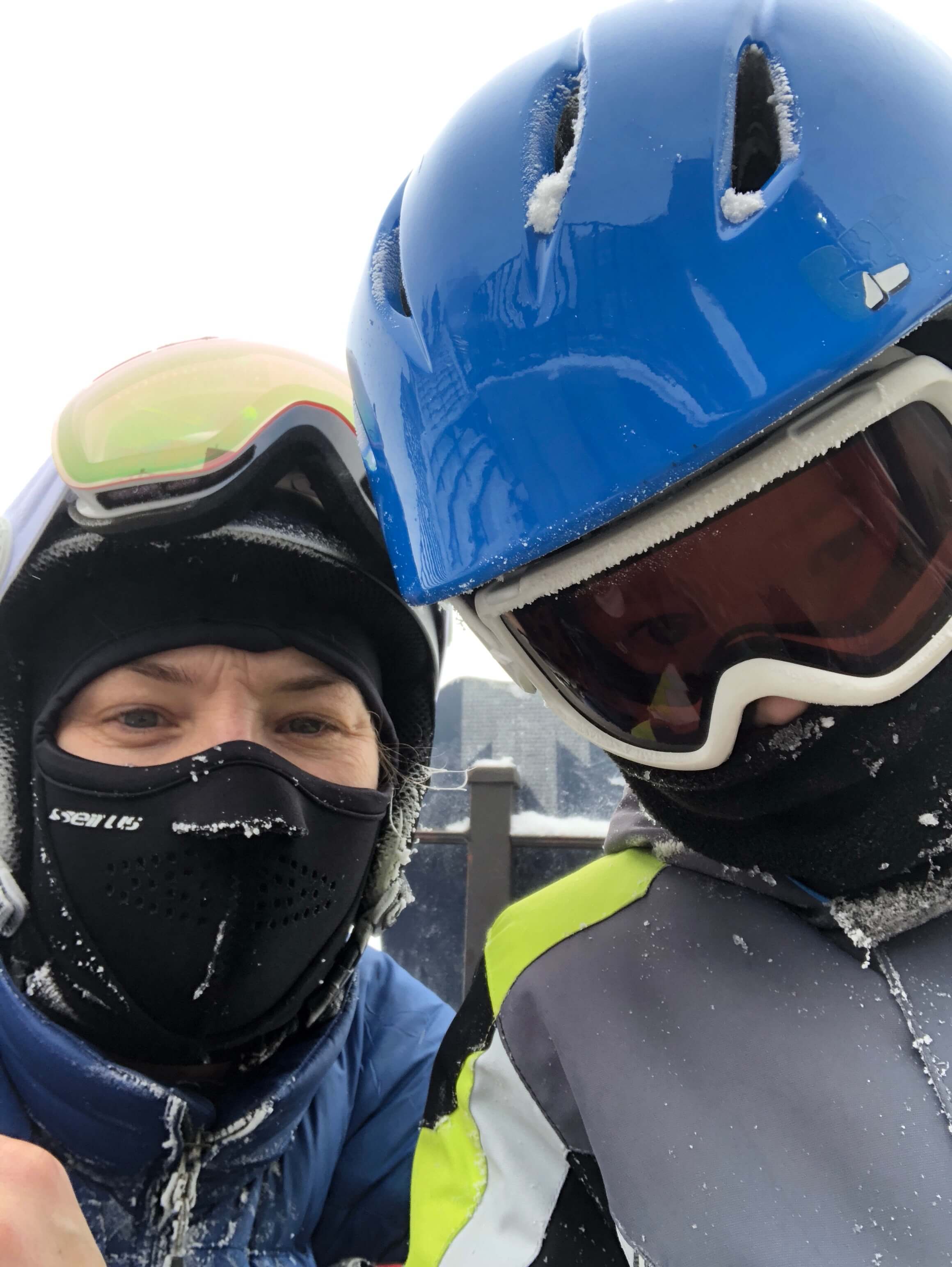 But we went. We talked about how to make the best of the situation. On the chairlift, we peered into the gloom, barely able to see the people on the chair ahead and I told Red how much I loved skiing these conditions. I could see him looking intrigued, and a bit suspicious.

‘Sometimes it feels as if you’re the only person on the mountain’ I said. ‘Real life is outside the bubble you’re skiing in. And you lose most of your ability to use your sense of sight, the one thing you depend on most when skiing.  You can’t see what’s coming. But you know this mountain, and we’ll do the runs you’ve been down many times.  And it’s cool that when you lose one sense, the others take over. You’ll hear the snow. And you’ll feel it so much better, in your muscles, through your skis. In this odd way, you feel free.’

I could feel the suspicion lift, and Red start to get excited about skiing in the partial whiteout. We jumped off the chairlift with a plan for where to ski. An easy cruise on a cat track to the back of the mountain, then down his favorite run. Although there were other skiers around, we could barely make them out, their sounds muffled in the gloom and thick snow, the bright colors of their ski jackets muted and only occasionally appearing in front of us through the soupy fog. I could hear the snow crunching under my skis, and I concentrated on keeping Red in my field of vision. This was no easy task when the visibility was down to a few feet. I wasn’t concerned about him, and so it was pleasant to focus on one thing, keeping him close, and letting my mind empty of all other thoughts. At one point he yelled out and I realized he was slightly further away than I wanted him to be, just on the very of my field of vision. ‘I’m here,’ I yelled back. ‘Can you see the big rock?  That’s where the cat track starts. You know where we are.’

‘I see it,’ he yelled back. ‘I do know where we are.’ From that point on, his hesitation was gone. He skied fast, faster than I had expected for the weather. I could hear him whooping with glee, and when I lost him from view, I would use that delightful sound to get close to him again. I watched his body loosen up, as he absorbed bumps that his body could feel, but his eyes couldn’t see. ‘This is amazing!’ he yelled at one point. I was overwhelmed with emotion when I realized that he was enjoying this as much as I was, and we whooped down the run together. I can only assume his smile was as big as mine because I couldn’t see it. 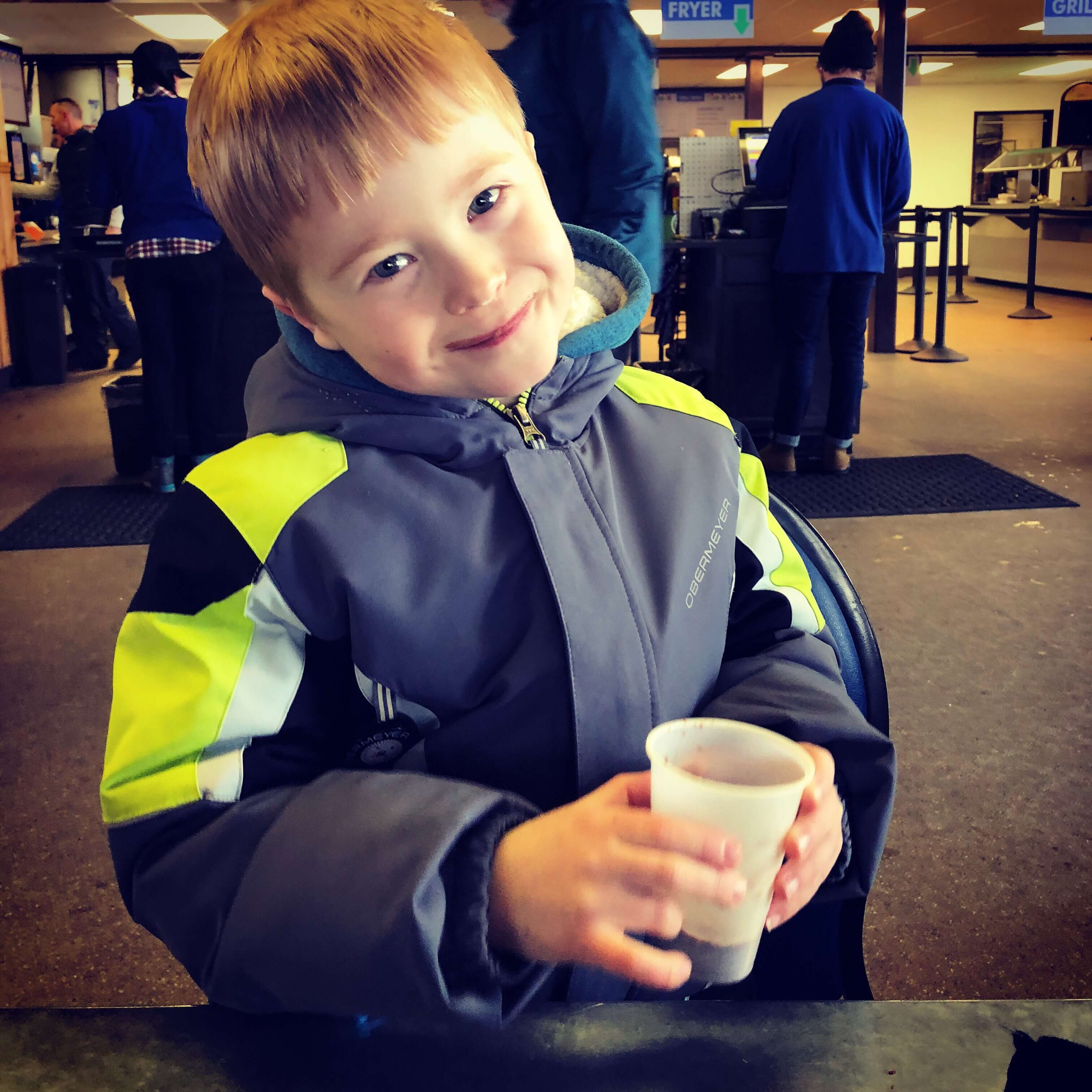 We didn’t ski for long that day because it was cold and windy, and hot chocolate at the lodge was calling. But I had seen his self-confidence soar as he had taken on this challenge and not just beaten it but thrived within it. At one point as we skied back to the front and took a blue run we didn’t know well, we hit some bumpy, icy, snow, very different to what we had been skiing around the back of the mountain. I felt the harsh bumps, and winced, wondering how Red would handle them as he skied just behind me. I stopped and turned to look, preparing for a fall. I watched him hit them, absorb them, fly into the air just a little, and then ski out of the rutted section.

‘Wow, did you see that? It was super bumpy. I didn’t even know until I was almost through them.’ Red said as he skidded to a stop next to me. I smiled. ‘That’s because your body was relaxed, and knew what to do without your brain getting involved.’ We laughed about that a lot, but I think Red now understands the truth of that statement. Sometimes we all let our brain get too involved, but especially if we are the anxious type, as Red surely is. One of the things I love about skiing and biking is the joy of leaving your brain for a while and letting your body do the work. It’s a lovely break from all that thinking!

So, how can you help your kids enjoy skiing, even when the dreaded whiteout is approaching?

1. Watch your own attitude

This one can be really tough, but if you are worried about the weather, your kids will pick up on it.  Show them how to relax and enjoy it by doing it yourself! Even if you have to fake it, working to discuss things with them in an upbeat and breezy way will help them, and it might help you get there too!

2. Set safety rules early, and stop to readjust if necessary

On the chair up the mountain, Red and I talked about how different the skiing would feel in whiteout conditions. We established a few basic ground rules, including that we would both work to keep each other in sight at all times and that if he lost track of me he was to stop in place and yell or ask for help from another skier to get him down the mountain if he couldn’t find me. Luckily he knows our home mountain well and we stuck to runs he knew, so we also discussed that he could ski down to the bottom of a chair if he felt safe doing so, but only after establishing that I wasn’t close first. It’s really hard to yell instructions as you’re skiing, and it’s hard for the kids to listen to you and concentrate on all the other things they have to do. We agreed that if one of us yelled stop, we would both do that immediately and discuss before skiing again. 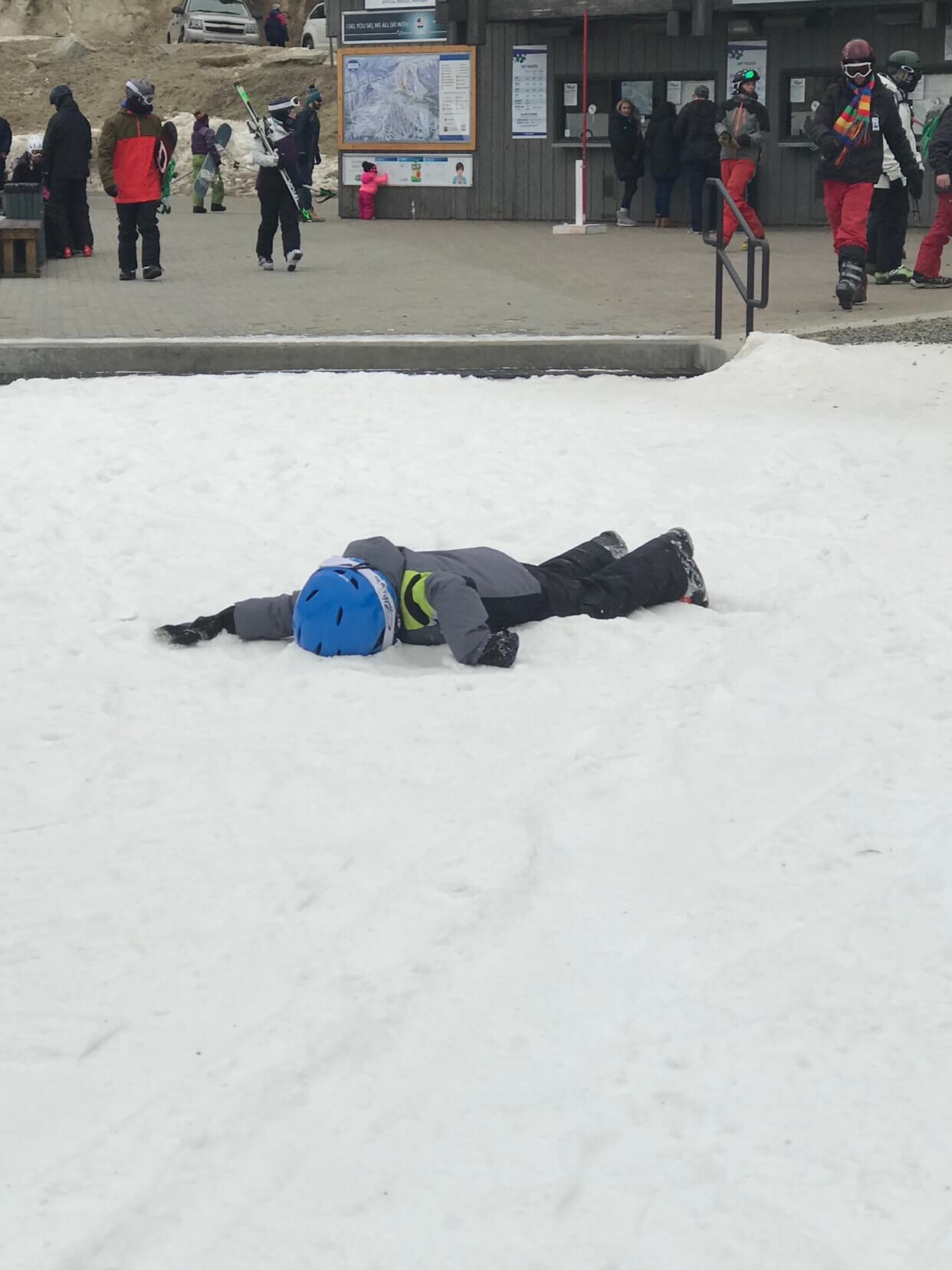 Normally we ski for a couple of hours straight and only hit the lodge at the end of the trip before heading home.  On this bad weather day, we stopped in first for some fuel and went for hot chocolate mid-morning. It’s easy to forget how quickly kids fatigue when they are working their muscles hard and doing something outside their regular comfort zone.  I know from our normal ski days that when Red gets tired, things go downhill fast, and I don’t mean on skis! On this trip, I took advantage of break opportunities before I noticed him getting tired, which meant we could get back out again and stay out longer in total.

4.  Stop While the going’s good

Red suggested we head to the jump park after a few runs, and while normally we push him for some extra ski time before going there, on this day I readily agreed. While I would have preferred an extra run or two, I knew that we would be ending on a positive note, and that would be worth it the next time we head up the hill and notice the weather turning sour.

How do you handle your kids’ attitudes on a bad weather ski day? I’d love to hear!