Boise is a fantastic place to live if you want to try a bit of hiking with your kids.  We live right on the edge of the foothills and can walk out our front door and into the hills if we wish. But even those who live further into the suburbs can be up and walking within a 30 minute drive of their house. This week we took the boys up one of our favorite mountain biking trails, Corrals, with Grandad who was visiting from Scotland.

Smalls, at 2, still needs the hiking backpack a lot of the time, but he is keen to follow in Red’s footsteps and walk as much as he can, especially at the beginning. I carry the backpack and offer it whenever he looks tired. It can make it a little harder to plan a route, however, as its a hard balancing act to find the line between tiring them out and carrying exhausted little people off the hills. That’s one of the reasons why I love an out and back route. Here’s the full list;

1. The kids can set the pace

We knew roughly where we wanted to go; a favorite biking trail.  We knew roughly how long we wanted it to take; just a couple of hours so we would be home for nap time.  And we knew the goal; show Grandad some great views of our city.  Beyond that, there was no agenda, other than to get everyone into the outdoors.  I expected that the boys would go slow, but was amazed at the varying levels of speed, none of which matched the adults! They raced off up the hill at the start, excited to be out.  Then they slowed down to an almost complete stop to examine stones they found.  Then some galloping along chasing dogs, slow down again to splash in puddles, a complete stop to squish the sand.  You get the idea.  We spend so much time mid-week moving around with a destination and time in mind, and I constantly seem to remind them to hurry up.  It’s exasperating for me, and I imagine much more so for them!  So it was wonderful to let them dart around and not have to harass them or bring time into the equation at all. 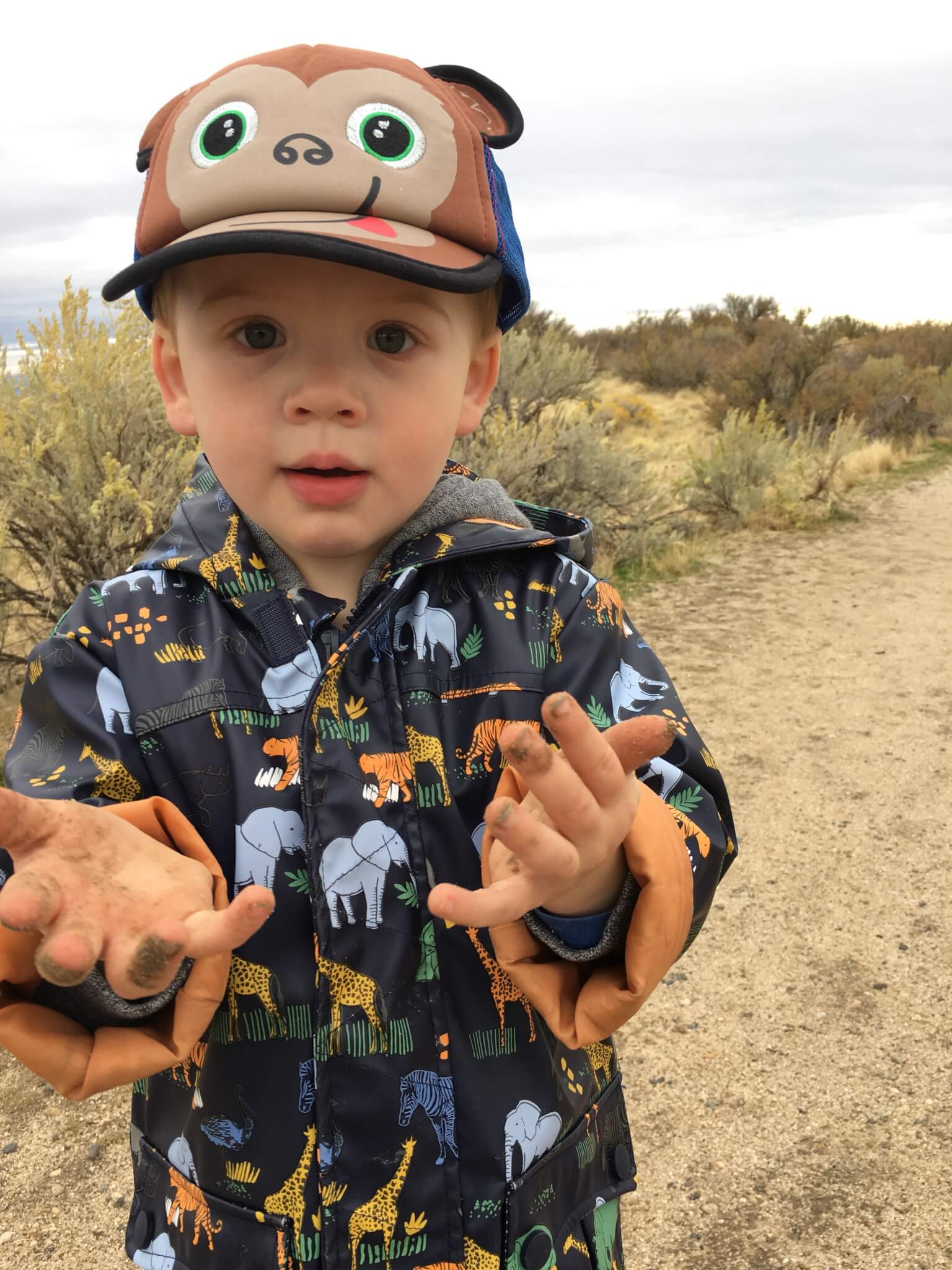 2. Less commitment – if it’s not working, just turn back!

This might sound like an excuse to wimp out, and to be honest, it is! Especially if you’re not used to hiking with your kids, there’s a pressure on the adults to make it an enjoyable experience so the kids don’t get bored, and to get them around and back to the car.  Before you know it, this hike has become a chore for you, another thing you feel you need to do for your kid.  But it’s supposed to be fun for you too!  If you feel that the weather might turn, or the kids might get tired, you can still attempt a hike knowing you can cut your losses and head back to your car in a certain amount of time.  While you can do that with a circular route too, there’s a certain emotional commitment once you’ve started hiking it, and just having that subconscious idea in your mind might make you not bother to head out on the hike in the first place if you feel it’s going to be hard work.

3. The kids gain some control and understanding of what is happening

Red likes to know what is happening; knowledge is his friend.  Inevitably he started to tire in the last part of the hike, but by then we were going downhill, and he knew what we were going to see next (and we knew what was coming up and could remind him).  This was a big plus for all of us.  Smalls was keen to get out of the backpack and walk/run on the way down, and it was much easier for him to do so.

As we sensed tiredness approaching, we allowed Red to pick our turning spot.  We made some suggestions, and he knew we’d stop for trail mix when we got there, so we made sure not to suggest it too early! But I know he appreciated having some control during the hike.

4. Stop to let the kids play without affecting your total trip time.

We had picked a sandy route, and it had rained the night before, so there were a lot of footprints all across the trail, human and animal! The boys had a great time following the tracks and guessing who had made them. And they loved making their own. Basically, they used it as a giant sandbox quite a lot of the time! This is a running theme across all the points, but I love to let the boys set the agenda on pace and activities on hikes like this, unlike mid-week activities where we often spend time directing and reminding them to get in and out the car by certain times, or not to stop on the bike on the way to school for fear of missing the bell or playtime.

They spent significantly more time than I had imagined examining and playing with the prints in the sand, and that was fine. The adults stopped and chatted, and in all likelihood, we didn’t hike quite as far as I had imagined. With Smalls’ nap looming, we didn’t want to be caught off guard with a sleepy toddler on the way home, so we could adjust the length of the trip and make sure to be back at the car at the best time for us, without limiting their opportunity to play and lead our hike. 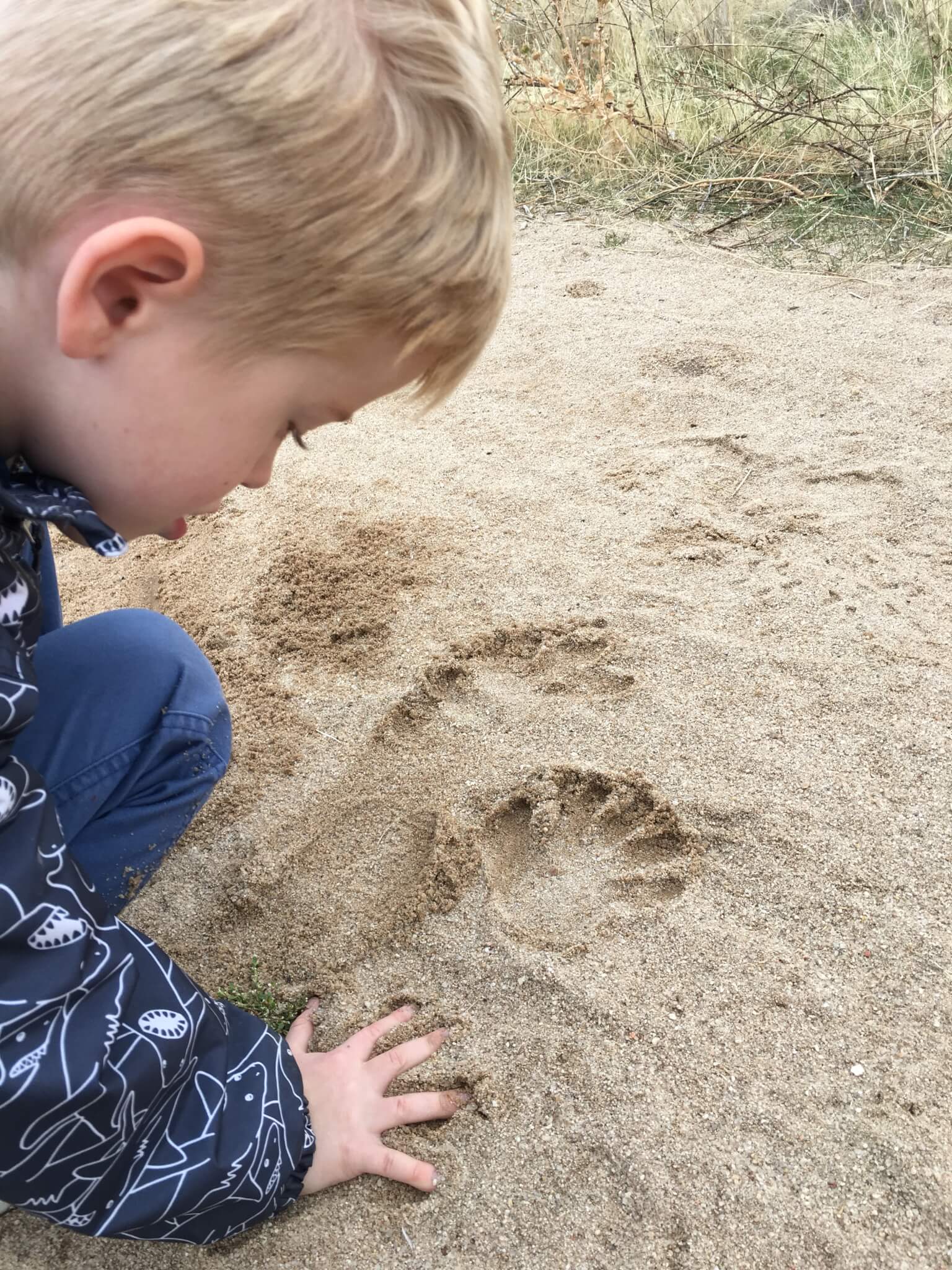 Red, in particular, had to be persuaded to go on this hike on a chilly Sunday morning, but we talked about it after and listed all the things he had enjoyed.  I told him to take a mental picture – we ‘clicked’ the camera on how we were feeling.  This is a great technique that I would love to claim to have invented, but I’m sure I picked up on the internet somewhere!  The next time I suggest something similar, and he tells me it’s too cold, or he just wants to read, I remind Red to look through the photobook.  ‘Do you remember when we took the picture of how you felt at the end of that hike with Grandad?’  It has really been helping him understand the delayed gratification involved with activities that often have some initial prep and hard work involved.

What kind of hikes do you like to take your kids on?  I’d love to hear about them in the comments.